A month ago, today, I embarked on another journey in ultra-running; a 6/12/24/30-hour crazy event called the Hamsterwheel. I signed up for the 12-hour.

The Hamsterwheel is a 3.97 mile “loop”, relatively flat course with one minor speed bump. The start/finish line is at the Hillsborough County Fairgrounds in New Boston, NH and proceeds onto the New Boston Rail Trail for an out and back before splitting to follow a service road on the perimeter of the fairgrounds. The speed bump was at the fork on the return, which was very short and steep and one which I decided was not worth an attempt to run up…I speed hiked this incline every lap.

The incline topped out onto an interesting area, a dirt pit, which when the night fell was utterly dark allowing for the night sky to show its dazzling diamonds. I recall at least two laps where I paused for a few moments to take in the beauty and feel appreciation for what I was experiencing.

Saturday, November 3rdstarted with a cold rain – it may have been in the 40s (at the warmest part of the day) but it felt much colder with the wind and rain. It had poured the day before as well, which flooded sections of the course. John and I set up shelter (technically a sunshade) and settled in, organizing gear. Not knowing what I would need, I brought quite a variety. A LOT of socks, which I ended up using nearly every pair. Three pairs of shoes which I ended up using all three pairs- I ran the majority of the event in my trail runners (wider toe box).

At the start of the event, most runners were already wet and anxious to get moving to warm up. I quickly fell into pace with another woman and we chatted for a bit…until we got to the turn-around. The turn-around was in a small parking lot which flooded overnight. The course continued out into the parking lot and around an orange safety cone and back to the rail trail.

Runners were congested into a small area, trying to avoid the parking lot turned lake. Some going through the water, others running off course and through the woods. I decided to run through the water, figuring I was already wet so the heck. Yeah, well what I didn’t count on was how deep the water was and how much mud was underneith. The mud latched onto my sneaker and when I lifted my leg, the sneaker was no longer on my foot. Luckily, I had on gaiters which wrapped around my ankle and saved me from losing the shoe entirely!

My sneaker however, now dangling from my ankle, was soaked in cold wet mud. Somehow, amongst the chaos of runners passing by me, I was able to stay balanced on one foot and wiggle my sneaker back on. After finishing the loop, I stopped at our shelter and changed socks. This didn’t help much since the shoes were already drenched. My socks were soaked within minutes, which led me to put on shoe #2 -my backup pair of standard running shoes.

Sometime during the event, gale-force winds picked up and sent many of the shelters flying across the fairgrounds. I was lucky enough that I had just come through the checkpoint as this came through, so I decided to wait it out. This cost me about 20 minutes or so, but I was able to have something warm to eat and drink and was able to change into my shoes (the trail runners) for the final time before heading back out.

A special surprise came when I spotted friends Krista, Stephen and Hendrick! Luckily they arrived just after the crazy weather. This was my second time meeting Hendrick- the first was at the 6-hour Twilight Challenge. Hmm…I wonder if Hendrick will subconsciously think of me as his crazy runner Auntie?!

At hour 10, I was wearing thin and experiencing discomfort from a nasty blister that had formed in the strangest spot. It was getting really cold, windy and dark. It was during this lap that I knew I was going to give it one more then call it a day. Calculations that even my tired brain could do, knew that I would be very close to the time cutoff if I attempted another two laps. Knowing I could make one more, I told John this was going to be my last lap and that I was going to enjoy it and that I did.

I took in everything. I shut off my headlamp a few times to be in complete darkness. I listened to the roaring brook and the whispers of fellow runners. My final ascent of the speed bump was a treasured moment. By this time, it was just about 8pm and very dark, no light pollution to be seen. I gazed up at the stars, thanked nature for being the place where I find peace and rejuvenation, and completed my final lap. 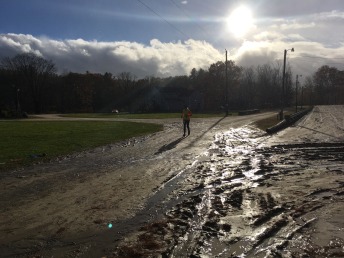 Calm after the storm, and mud

One foot in front of the other 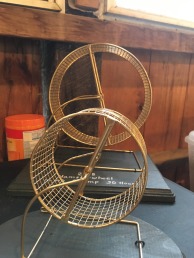